All About Yellowstone's Winter Wildlife

Gardiner, Montana, is located at the North Entrance to Yellowstone National Park, where wildlife sightings are all but guaranteed. After all, Yellowstone is home to the largest concentration of wildlife in the lower 48 states. And Gardiner’s position at the base of the Northern Range—one of the best regions for spotting wildlife in all of Yellowstone—makes the town the perfect basecamp for wildlife watching enthusiasts around the world. 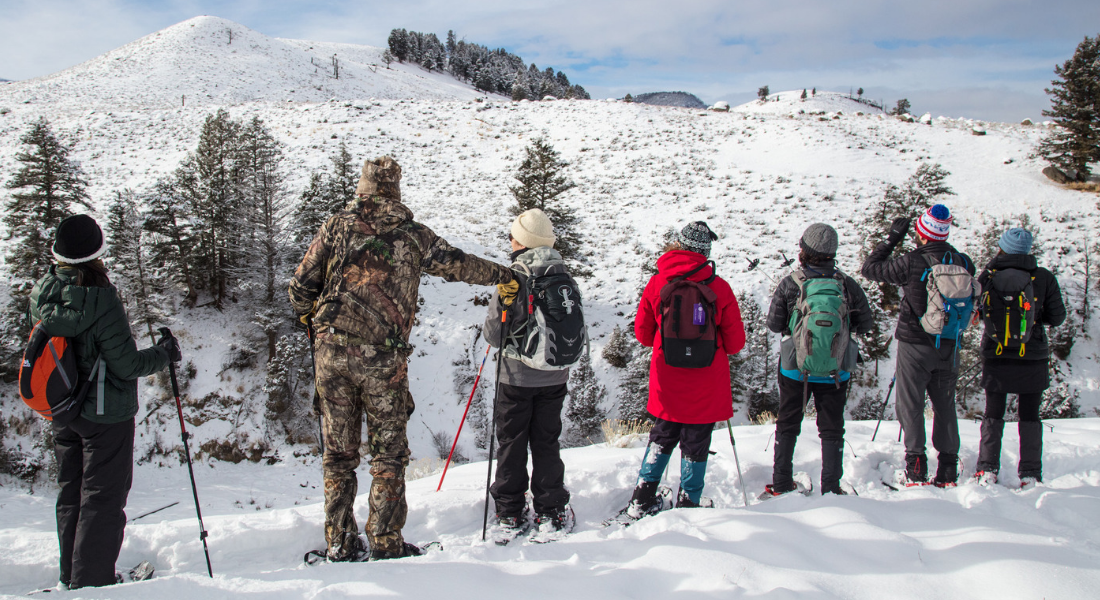 What makes winter such an exciting time of year for wildlife watching? For one thing, many animals migrate from higher elevations to lower, less snow-packed elevations, meaning you’ll be able to see more wildlife closer to park roads and other developments. For another, the snowy landscape acts as a blank canvas for easily spotting wildlife as their dark shapes move along the hills and valleys. Finally, there are far fewer crowds to contend with as compared to the summer months, providing a quieter, more natural experience for observing the many species who call Yellowstone home.

So, who are the prime wildlife suspects in the wintertime and where will you most likely find them?

An abundant large mammal in the park, Yellowstone offers summer habitat for more than 10,000 elk. Most of them winter outside the park boundaries; look for them grazing in the fields alongside Highway 89 as you drive towards Gardiner via Paradise Valley. 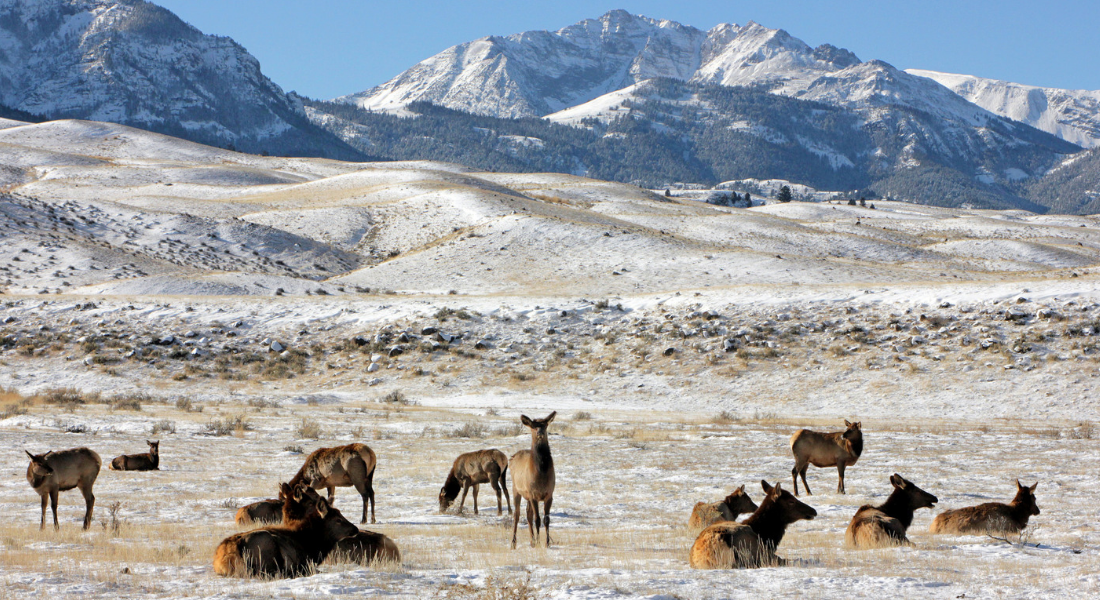 Bison are the largest land-dwelling mammal in North America. Remarkably, Yellowstone is the only place in the lower 48 states with a continuously free-ranging bison population. During winter months, you can find bison in Gardiner basin—often roaming right through town—and inside park boundaries between Mammoth Hot Springs and Lamar Valley. 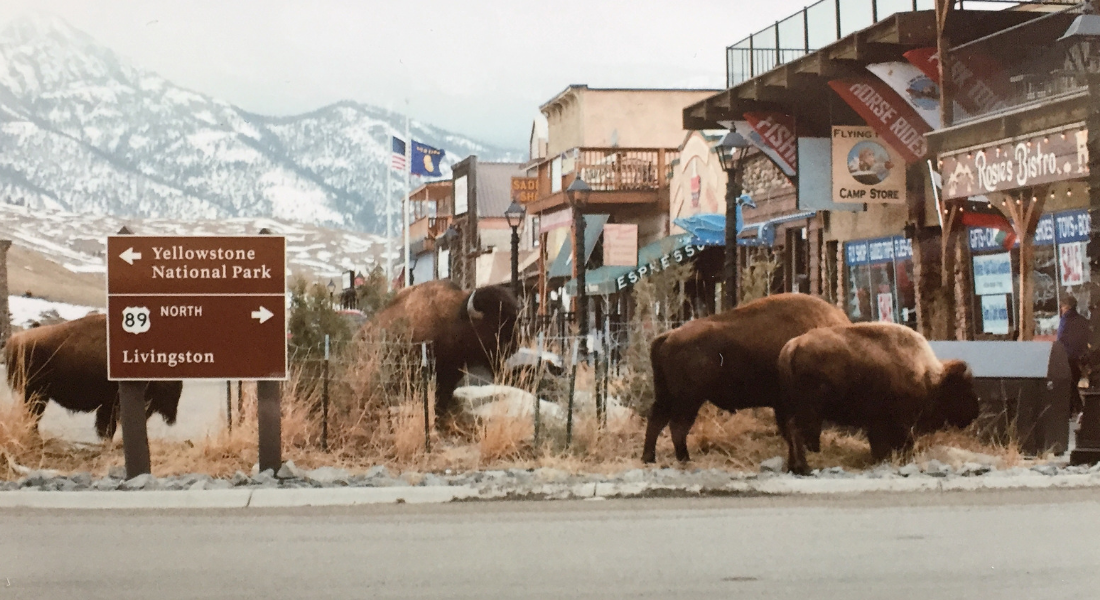 Bison in the town of Gardiner, MT/Joe Gross

With their lush coats and hunting mannerisms, red foxes are a delight to see in the wilds of Yellowstone. During winter, foxes increase their activity around dawn and dusk, and sometimes even in broad daylight. Keep your eyes open for them in forested areas along the Yellowstone Northern Range and in Mammoth Hot Springs. 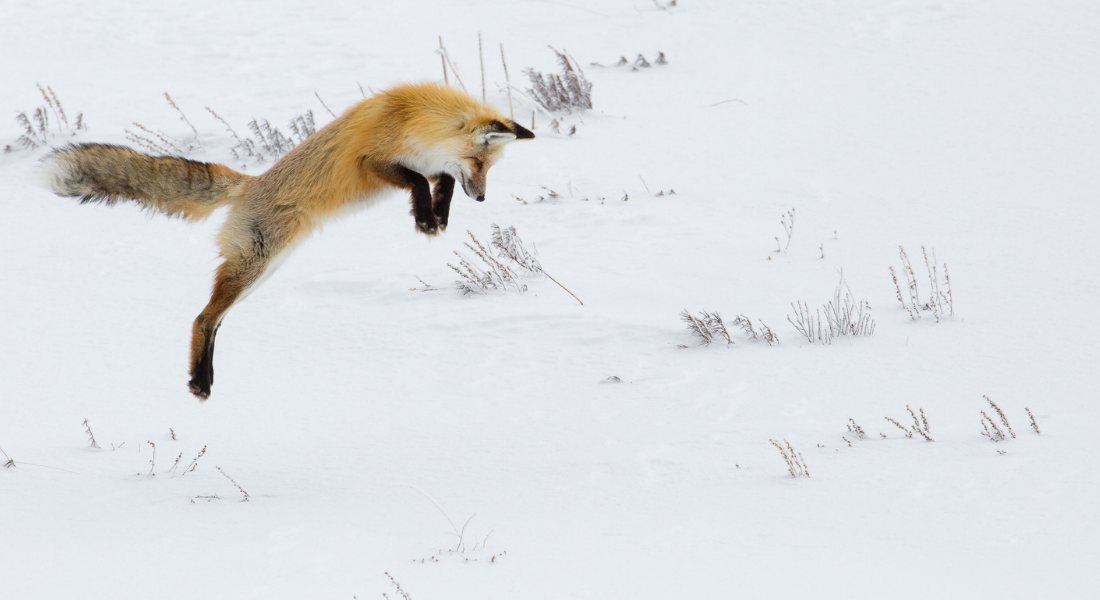 A fox hunts for voles in Yellowstone/Yellowstone NPS

Moose are a bit more elusive than other members of the deer family in Yellowstone, even though they are the largest. During wintertime, look for these solitary creatures in marshy areas near meadows and along rivers, especially along Soda Butte Creek in the northeastern section of the park and in Round Prairie near Pebble Creek. 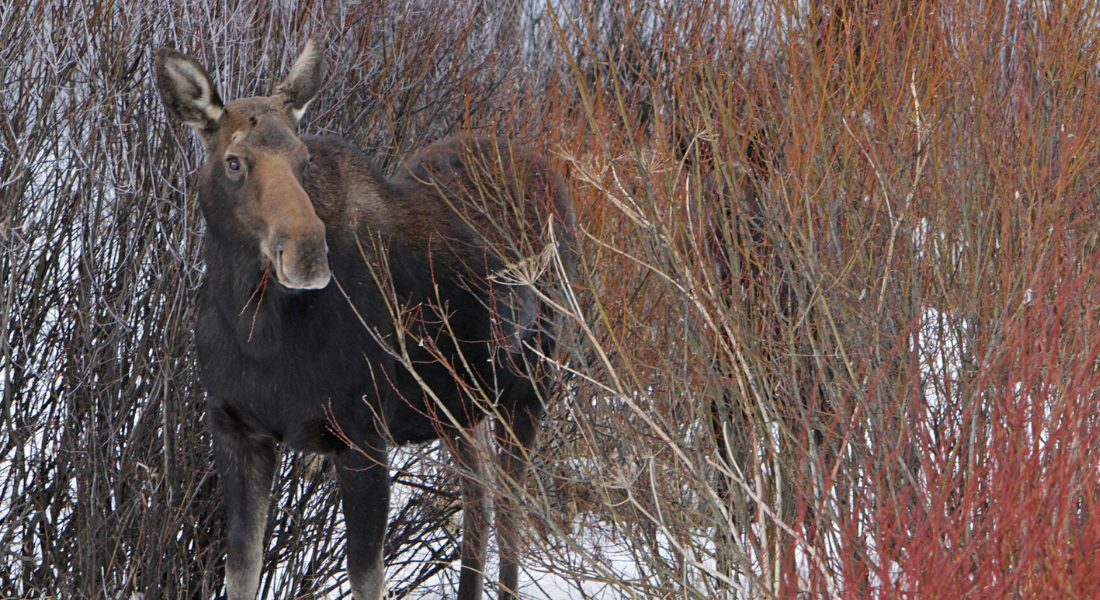 A moose hides in the willows in Yellowstone/Yellowstone NPS

The Northern Range near Gardiner is considered one of the best places to watch wolves in the world, especially at dawn and dusk when the animals are most active. Nearly 100 wolves have territory they hunt inside park boundaries. During wintertime, look for them between Mammoth Hot Springs and Lamar Valley (spotting scopes help!) 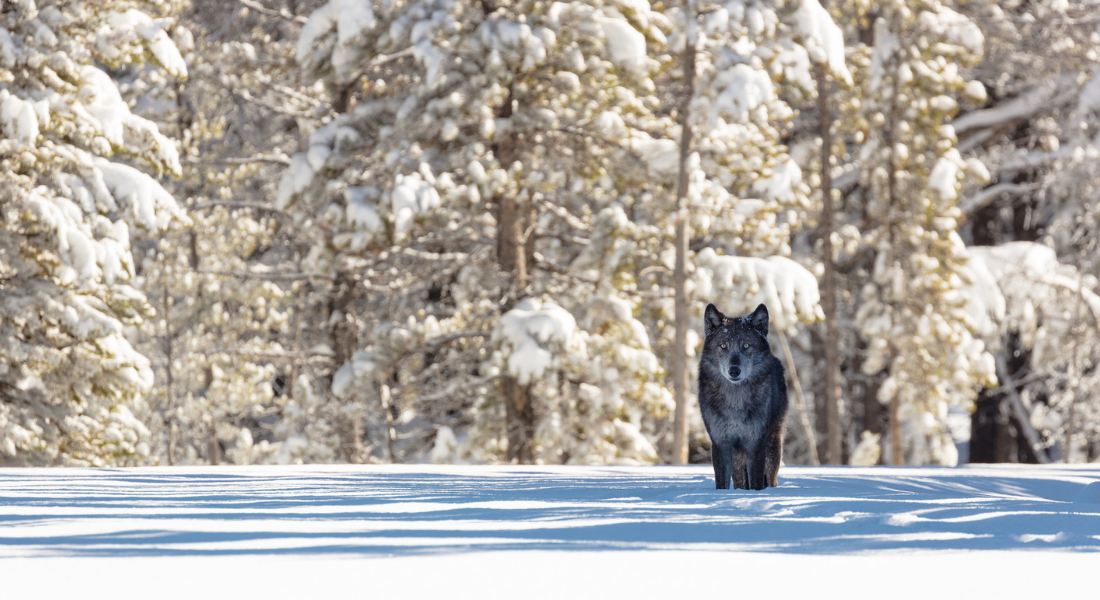 Both members of the mustelid family, short-tailed weasels (also known as ermine) and pine martens are a joy to see scurrying across cross-country ski trails and amongst the pine trees. During winter, short-tailed weasels turn completely white and can be found hunting in willows and spruce forests along the Northern Range. Pine martens can be spotted denning in conifer forests or hollowed out tree stumps.

Also known as mountain lions, cougars are one of the top predators in Yellowstone National Park. Though it’s rare you’ll see one, the Northern Range offers good habitat for cougars due to the area’s light snowfall. Cougars prefer rocky terrain and forested areas that provide good cover for hunting prey—such as elk, mule deer, and smaller mammals like marmots. 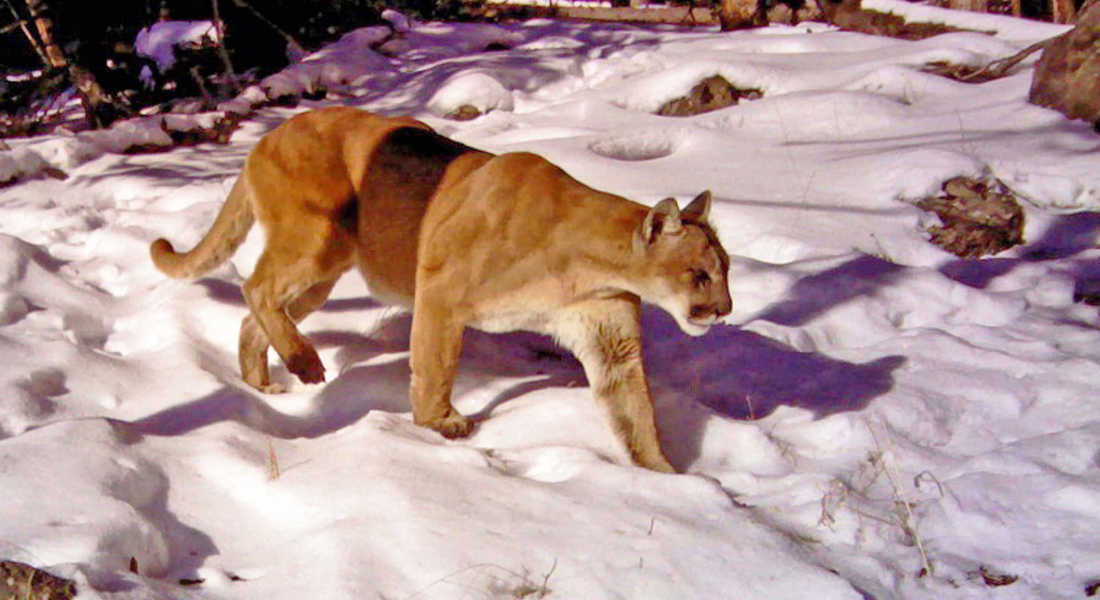 Cougars are rarely spotted in the park/Yellowstone NPS

Bighorn sheep are often spotted traversing the cliffs on the eastern edge of Lamar Valley. During winter months it’s also common to see the talented climbers on the cliffs opposite the Yellowstone River near Calcite Springs from the ski trail to Tower Fall. Keep an eye out for them in mid- to late-November when mating season begins and drive with caution between Livingston and Gardiner as they will sometimes congregate along the highway.

Pronghorn are the smallest and quickest ungulate in Yellowstone. In the wintertime, visitors often spot these grassland-dwellers near the North Entrance in Gardiner, Montana, and along the Old Yellowstone Trail, a dirt road connecting Gardiner to Cinnabar, Montana. The males will shed their horn sheathes in November and December until they begin growing next year’s set in February or March. 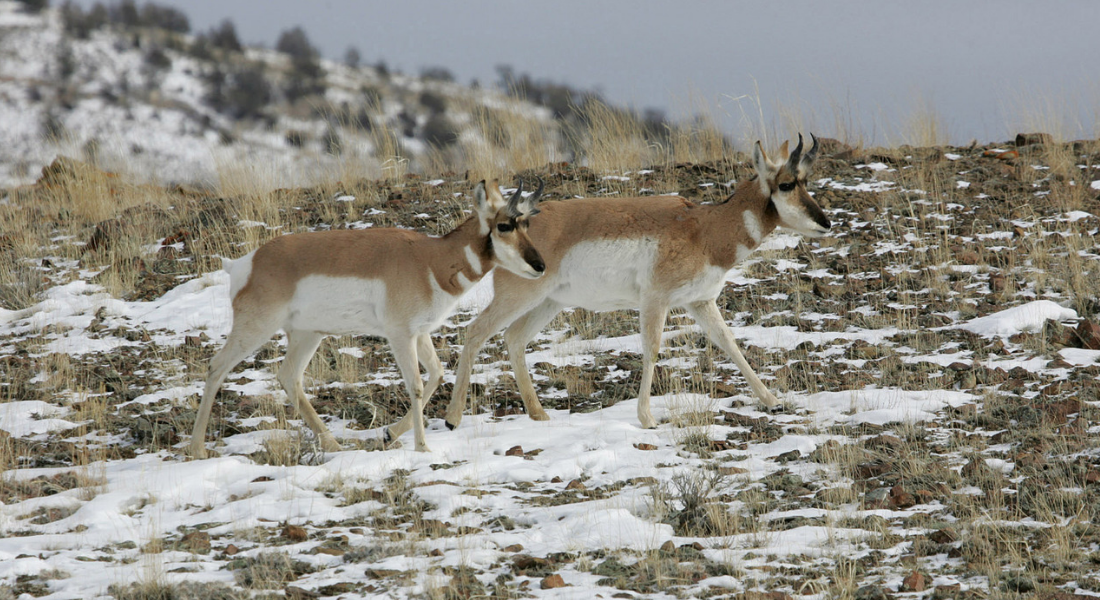 Although often mistaken for a wolf, coyotes are about one-third the size of their larger canid cousins. Coyotes are relatively abundant in Yellowstone—look for them hunting for voles in the Lamar Valley or trotting along the roadways on the Northern Range during winter months. 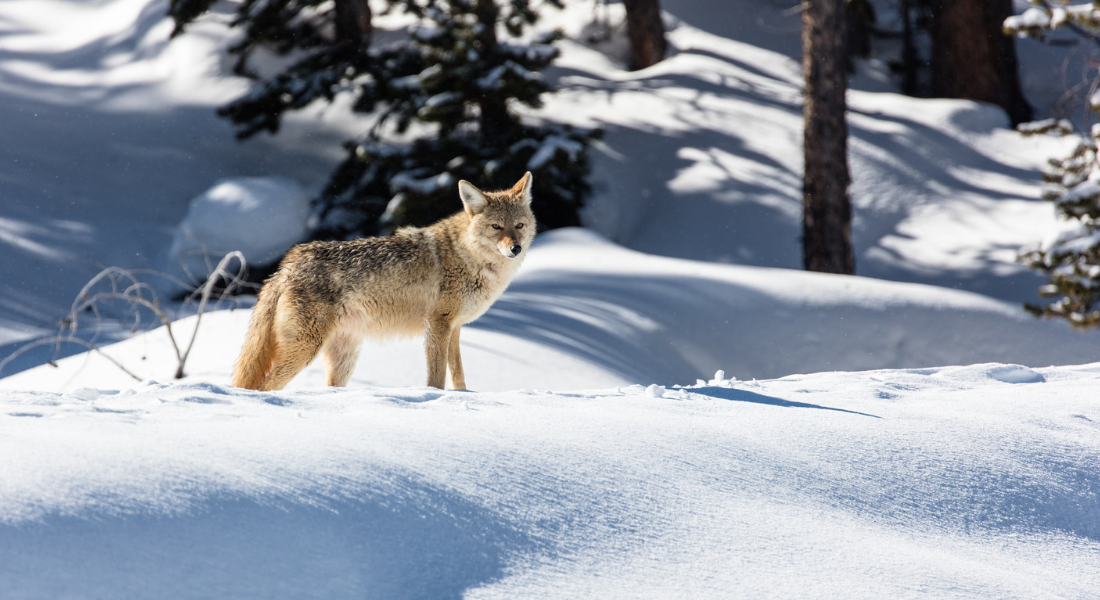 The most aquatic member of the weasel family, river otters are active all year long in Yellowstone but especially fun to watch sliding along icy riverbanks in the wintertime—sometimes at speeds of up to 15 miles per hour! Look for them along the rivers and creeks of the Northern Range in the winter. 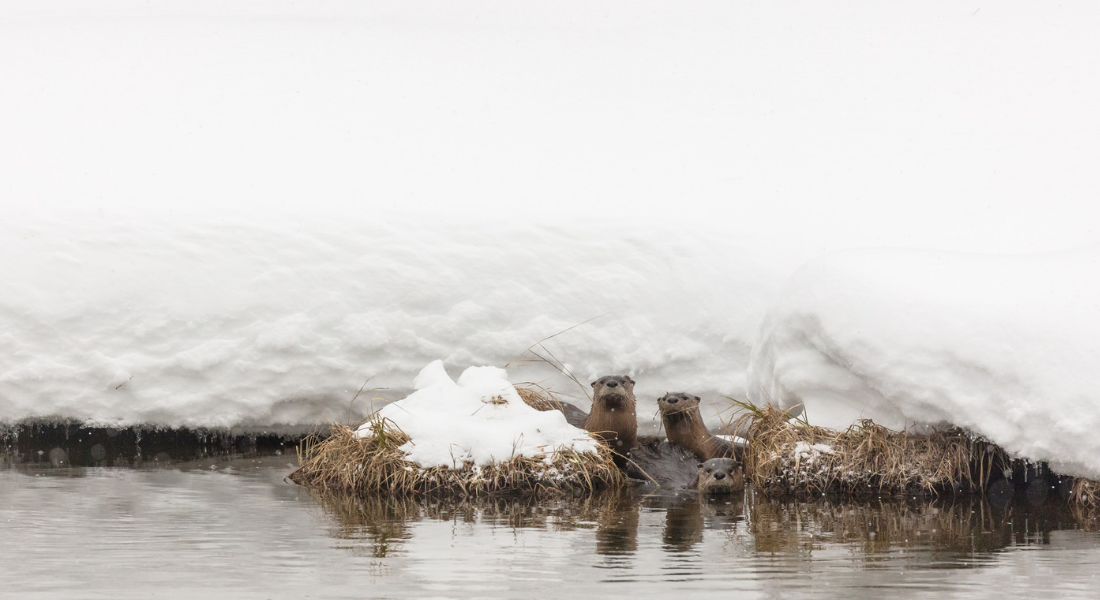 With such a diverse and charismatic cast of characters, there is certainly an animal to capture everyone’s imagination on a Yellowstone National Park winter adventure. For the best chance of spotting wildlife—and to leave the driving and planning to someone else—be sure to hire an expert wildlife guide out of Gardiner, Montana! 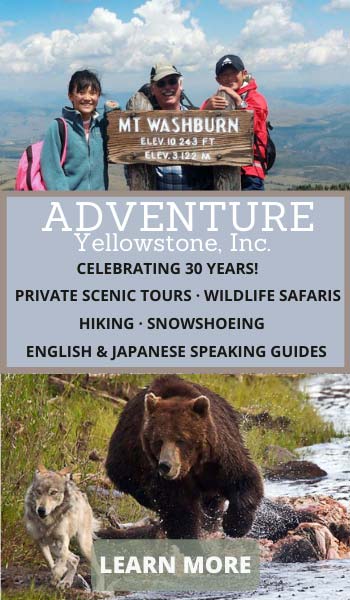 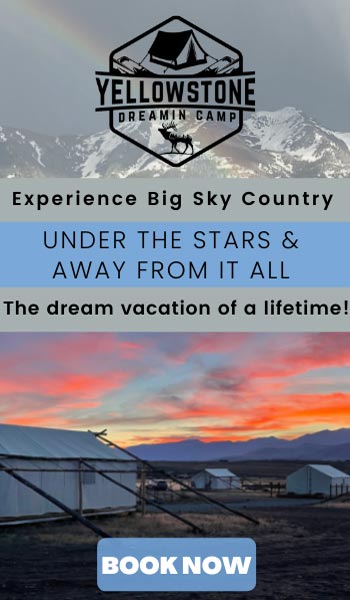 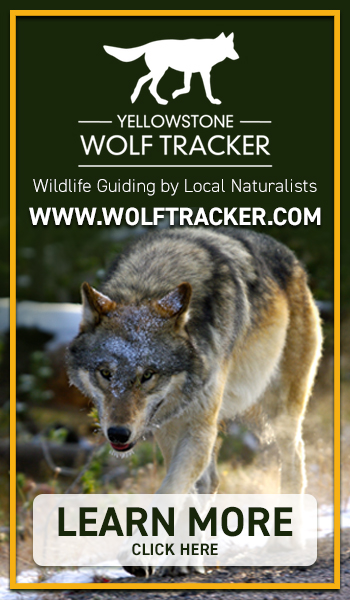 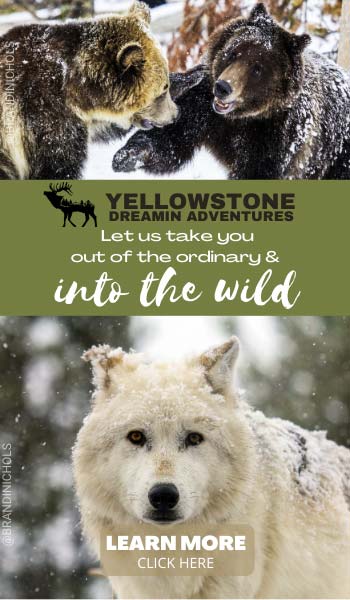